Teams from throughout the nation and beyond came to Auburndale recently to prove their mettle on the baseball diamond. 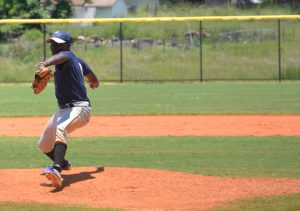 A picture of a Ugandan baseball pitcher

The Wilson Premier Championship East, featuring many of the top baseball prospects around, had three tournaments at the Lake Myrtle Sports Park between June 22 and July 10, featuring 2020 graduates, 2021 graduates and 2022 graduates.

Known as the gold standard among summer travel tournaments, many of the players on the field at a Wilson Premier tournament will continue their baseball careers either in college or professionally.

Each tournament featured more than 48 teams. And while many were from the Southeastern United States, teams from Canada, Puerto Rico and even Uganda participated.

The projected economic impact is $4.5 million; data continues to be collected and analyzed.