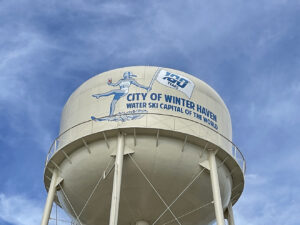 WINTER HAVEN – You might say that the new girl in town towers over the competition.

What was once a beige water tower at the corner of Avenue B SW and Magnolia Avenue is now a beacon to the upcoming International Waterski and Wakeboard Federation’s World Water Ski Show Tournament, to be held on Lake Silver In October 2022. The tournament will serve as the capstone to a year of events promoting Polk County during the sports centennial celebration.

Sporting a new logo celebrating Winter Haven as the Water Ski Capital of the World and marking the sport’s 100th birthday, the painting of the tower is just one of many joint efforts between Polk County Tourism and Sports Marketing – marketed as Visit Central Florida outside of Polk County – the City of Winter Haven and USA Water Ski and Wake Sports. 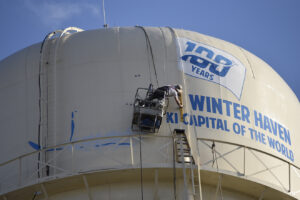 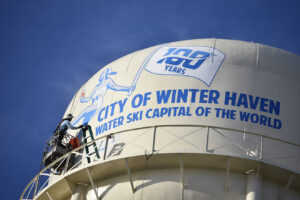 Harkening back to Winter Haven’s vintage water ski seal, the logo honors the long, intertwined history of the sport and the city. Nowhere else have as many records been broken or sport pertinent inventions been created than on Winter Haven lakes. For while the sport may not have been invented here – that honor goes to Lake City, Minn. – thanks to Dick Pope Sr. and the post-World War II water ski shows at Cypress Gardens, Polk County has become the sport’s mecca. By the 1950s, Hollywood took note and Winter Haven became the Hollywood of the South thanks to movies such as “Easy to Love” and “Deep Adventure.” TV soon followed.

All this attention from Hollywood, in turn, drew greater athletes to the area. By the 1970s, nearly every innovation and record of the sport had been set on Polk County waters. Today, the Chain of Records event continues that legacy, having just attempted to set more than 16 national records and 12 world records over a five day span.

The IWWF 2022 IWWF World Water Ski Show Tournament, slated for Oct. 22-23, 2022, features team from around the world competing in the international recognized discipline of show ski. Each team will perform a one hour spectator-friendly show that combines entertainment with world class athletics. The USA Water Ski Show Team has won the team title each year. Teams expected to participate include the United States, Belgium, Canada, Germany, Australia, China and Mexico.

The event is a joint effort between the Cypress Gardens Water Ski Team and Polk County Tourism and Sports Marketing (PCTSM) to bring Winter Haven the biennial world championships while simultaneously celebrating the centennial here, at the Water Ski Capitol of the World. Assistance from USA Water Ski and Wake Sports, the national governing body of organized water skiing and wakeboarding in the United States, was also instrumental.

Watersports are a powerful economic engine for Polk County that will see significant growth as a result of the upcoming centennial celebrations. Water skiing is part of an estimated $42 billion industry, according to the National Marine Manufacturers Association. Coming to Polk over the next year will be various events in each of the nine disciplines that comprise the sport of water skiing, not to mention the centennial celebration on Lake Silver in July and culminating in the IWWF World Water Ski Show Tournament in October. Besides countless millions of dollars in economic impact, these events will provide national and international exposure in both traditional and social media. Augmenting these events will be travelling serpentine displays highlighting the intertwined history of the sport and county, various promotions throughout the nation, and increased traffic to the Visitor Information Center, home to the USA Water Ski and Wake Sports Foundation Hall of Fame.