“Visit Central Florida” night once again a hit in Detroit 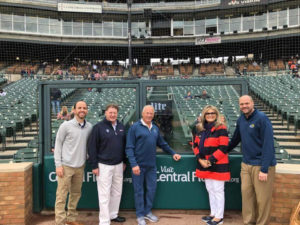 Once again, 10,000 fans walked away from Comerica Park in Detroit with a little bit of Central Florida sunshine on their backs.

For the second consecutive year, Visit Central Florida Hawaiian Shirts Giveaway Night successfully reminded Tigers fans of the connection between Polk County and Michigan while putting a smile on their faces.

The shirts, which featured ticket stubs highlighting the more than 120 years of Tiger’s history, have become a signature giveaway for VCF in the Detroit market, and one sought out by both fans and Hawaiian shirt collectors. The Hawaiian shirt and Detroit Tigers cap combination became part of American lore – and a Detroit area staple – in the 1980s after the Tom Selleck television show “Magnum, P.I.” made it the character’s signature wardrobe.

While in Detroit, PCTSM negotiated a new three year marketing agreement with the Tigers. Michigan continues to be Ground Zero for PCTSM’s marketing efforts, and the Tigers fan base is one of the most loyal in Major League Baseball and Spring Training. Additionally, viewership footprint for Fox Sports Detroit spreads throughout much of the Midwest. During the final home series of the Tigers 2018 season, PCTSM staff and two TDC members, Jackie Johnson and Ron Myers, greeted fans at the VCF Visitor Station and handed out 1,500 branded rally towels and thousands of 2019 Spring Training schedules.