It started with less than 150 people and just a handful of airplanes. Today, EAA AirVenture Oshkosh event, held this year from July 22 to July 28 in Oshkosh, Wisconsin, is the largest airshow in the world. Shattering previous records, attendance increased nearly 7 percent to exceed 640,000, with more than 10,000 total aircraft arrivals. In all, attendees were from 93 different countries. 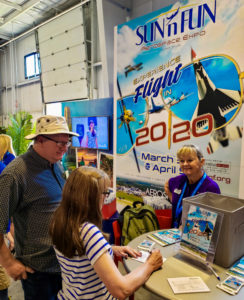 And a few folks from Polk County Tourism and Sports Marketing, known as Visit Central Florida to the rest of the world.

“We took over not only their booth, but also their social media accounts,” said Tourism Industry Sales specialist Joni Allen, who has represented PCTSM at 16 previous AirVenture events. “Both organizations felt that this effort would help limit the amount of spillage into other counties during SUN ‘n FUN. Plus, it gives us the opportunity to tell folks how much there is to do in Polk County with the aim that they’d have more to do – and spend on – while they are here, while also extending their stay. It is all about putting heads in beds and filling the coffers of Polk County businesses.”

“Many of these folks aren’t just airshow spectators, they are aviation enthusiasts who travel from event to event,” said Allen. “And they are into technology, so social media was a necessary and affective strategy.”

“We had a raffle where people had to register to win a vacation,” said Roberts. “This allowed us to capture more than 500 emails, which allows us to extend our conversation about Polk County.” 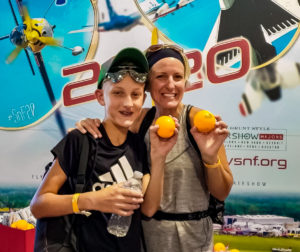 Additionally, the one-on-one contact meant that education was slipped into the conversation with this crop of unique tourists who fly private airplanes to destinations.

“We found that many of the folks didn’t know about our other airports,” said Allen. “That allowed us to not only highlight those, but also bring up the vast amount of vacation homes that Polk County has to offer. Many of the folks we talked to had no idea.”

According to Allen, the key to education is getting the message our early and often.

“There are plenty of competing messages out there around SUN ‘n FUN,” she said. “By having ours out there early and often, we hope to cut through the competition. Plus, people are already making plans and booking stays due to our aggressive efforts. Those are the results we’re looking for. ”