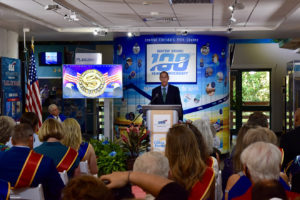 Shaun Murray, a pioneer in the discipline of wakeboarding who rose to widespread fame through a video game bearing his name, was just one of the individuals inducted into the USA Water Ski and Wake Sports Foundation Hall of Fame on April 24 at the Central Florida Visitor Information Center.

The ceremony also served as the coming out party for the all new USA Water Ski and Wake Sports Hall of Fame Museum. Featuring displays highlighting all nine disciplines of towed water sports, it also chronicles the sport’s progression from hobby to Hollywood and the Olympics. Displays include some of the first water skis used by the sports inventor, Ralph Samuelson; the costume used by Esther Williams in the 1953 movie ode to show skiing, “Easy to Love;” and the various inventions that have continued the evolution of the sport. The museum will serve as another attractor on the eve of the sport’s 100 anniversary in 2022, which PCTSM will be promoting.