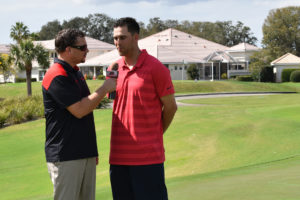 Ugandan survivors of the child sex trade may never come to the United States, let alone Polk County. However, a chance encounter between a Detroit Tigers pitcher and a member of the Polk County Tourism and Sports Marketing staff may make their life a little better.

A year ago, Tigers starting pitcher Matt Boyd and his wife, Ashley, learned about Dorothy Stella Allue in Uganda, who was giving shelter to 36 girls in Uganda but was falling into financial crisis due to the death of her husband. Reflecting upon their deep Christian faith – Ashley herself had worked for a nonprofit that strives to prevent child sex slavery – they opened their hearts and checkbook.

Forming a nonprofit, they later traveled to Uganda, bringing the girls supplies gathered not only by themselves but by churches as well.

A year later, promoting a fundraiser to be held at TopGolf in Brandon, Boyd and the Tigers chapel leader, Jeff Totten, were talking to golfers during the putting contest on the course at Grasslands Golf and Country Club during the Major League Scramble on Feb. 21. Also there was PCTSM communications specialist Jack Cormier, who was so moved by Boyd’s sincerity that he offered to help promote the fundraiser.

On March 1, the first press release from PCTSM concerning Kingdom Home was issue to local and Michigan press. The first article, by Detroit Free Press journalist Jeff Seidel, came out March 9. As of March 19, more than $580,000 of free publicity has been generated for Boyd’s charity. Through outlets as varied as Sports Illustrated, People magazine and even the Wisconsin State Farmer, the plight of Ugandan sex slavery has been in front of as many as 63 million people. Locally every major broadcast outlet aired interviews with Boyd about the fundraiser, the result being more than $45,000 raised toward the charity.