The Quake on the Lake is back!

LAKELAND – The roar of the Orange Cup Regatta returns this weekend, Oct. 16 and 17, to Lake Hollingsworth in Lakeland. 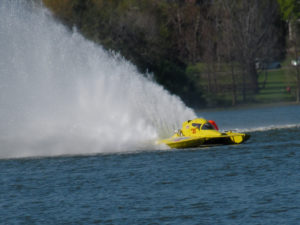 Marking its 83rd event and spanning 87 years, the fastest sport on water returns to Lakeland – albeit at the end of the American Powerboat Association’s season rather than the beginning.

“We think this is going to work to our advantage,” said Gene Engle, Orange Cup director and Central Florida Racing Club president. “This is really two races – one Saturday and one Sunday. So there are a lot of points to be earned.”

The largest entries, the Grand National Hydroplanes, run first. Known as “the quake on the lake,” they reach speeds close to 150 mph. But not to be missed are the smaller classes of racers, such as the Jersey Skiffs, that often spend as much time in the air as they do in the water.

Fans and spectators are welcome to ring Lake Hollingsworth with chairs and blankets to enjoy the action. There is no cost.

The Orange Cup Regatta is Polk County’s second oldest sporting event – only second to Major League Baseball Spring Training – with the first race held in 1933. Started by Walter Engle, Gene’s father,  the Orange Cup Regatta has been a staple in the power boating world for decades. In fact, powerboaters refer to the location, racer-friendly Lake Hollingsworth, as “the Lake of Records.”