Forget sliders and knuckleballs, data, not stats, is now the sport’s cutting edge

LAKELAND – Peanut butter and chocolate. Bacon and eggs. Apple pie and ice cream. Some things just seem destined to be together. 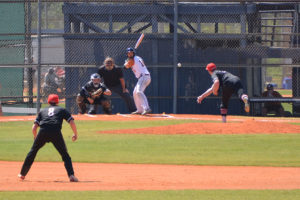 Serial entrepreneur and former minor league catcher Kevin Davidson knows another winning combination – the marriage between baseball and statistics. He also knows that this particular marriage has problems.

“Statistics – batting average, on-base percentage – they tell you the result of a play,” said Davidson. “Today, Doppler radar machines in parks capture more than 30 data points on every pitch. That data tells you the how of the event.”

Devices capture that data during a game, including everything from the spin rate of the ball to the exit velocity of the ball off a bat. After a game, that data is available to anyone via a spreadsheet.

“The stats represent the outcome, the data represents how the outcome was produced,” said Davidson. “And knowing how something happened scientifically gives today’s coaches and players a concrete way to improve. The problem is, by the end of a game, millions of these data points from every pitch and hit have been captured. The typical report is a multipage spreadsheet. For most coaches, it is a jumble of numbers. Most coaches I know don’t have the multimillion dollar budget to employ data-scientists.”

Enter BaseballCloud, a centralized software platform that consolidates and translates the data so that any parent, player or coach can understand it. Having launched June 1, the vision for BaseballCloud and its co-product, TeamCloud, is to provide coaches and amateurs with the same developmental benefits that professional players enjoy from data analysis. Additionally, players can compare their results with other baseball players at every amateur and professional level.

Davidson feels that TeamCloud, the coach-facing software, has the most potential to change the amateur game.

“Right now, your typical baseball coach spends more time filtering the information he has than analyzing,” said Davidson. “I know that at one Central Florida college, for example, on average the coach spends 22 hours a week filtering the numbers, manually, off a spread sheet. TeamCloud might be software, but what it really does is automate something coaches do now, freeing up time for what will improve the players – coaching.”

Additionally, Davidson sees data as the tool college coaches will use in the future.

“I see a day where coaches travel less and data-mine more,” he said. “They know what they are looking for. With software like this, they’ll be able to use the profiles of their current and historical players as guidelines to what they are looking for in a recruit. I mean, it is already here. They are telling us how they want it set up in order to let them do that. They want to make recruiting efficient. It has become an arms race.”

College coaches year after year travel the country with the hopes of finding that perfect combination talent to get to Omaha, the site of the College World Series.

“They get thousands of emails and phone calls from people telling them they have to come see this kid play,” Davidson said. “They can’t see everyone, they spend countless hours calling contacts to see who has information on what player.” Knowing the inefficiencies and challenges faced by coaches, Davidson said that the change toward data is happening now. But a self-realized old school baseball guy himself, Davidson knows that the age of data mining in baseball is off putting for some.

“People tell me all the time that data is the problem,” he said. “Data is not the problem. Old school guys need to understand that data isn’t a philosophy, it is information that should guide philosophy. In all reality, the game hasn’t changed as much as people think. It is the same game, just with a different vocabulary and more information.”

But data-crunching software is only a part of his company’s growing baseball portfolio.

Last year, Davidson, an investment manager, and his partner, former billboard mogul and real estate developer Joseph Sleiman, purchased the largest collegiate baseball event in the nation, the RussMatt Collegiate Invitational, through their holdings company, DS 7/29/33 Holdings, LLC. They later purchased major players in Florida’s travel ball market, the Central Florida Baseball League and a premiere tournament series, Florida Scout Ball. Over the last two months, with the additions of Nations Baseball and a 15,000 square foot indoor training facility, they show no signs of slowing down.

“Softball is on the horizon,” said Davidson.

The endgame, he said, is to leverage the volume of players and teams to help lower the cost of travel baseball.

“I grew up in a duplex with a single mother. I would never have been able to afford travel baseball today,” he said. “And my fondest baseball memories are of travel ball as a kid. I want other kids to have that too – the cherry on top is if they get a scholarship. I like to think that baseball, at this level, builds relationships while instilling the qualities that team sports thrive on, like teamwork, selflessness and adversity. We’re building better people through baseball. That shouldn’t cost a fortune.”