The Florida road to basketball riches runs through Polk

WINTER HAVEN – The Basketball Tournament (TBT), the 64-team, $2 million winner-take-all event televised live on ESPN, today announced plans to bring one of their TBT 2020 regionals to Polk State College in Winter Haven from July 31-Aug. 2. Eight teams will compete in the Florida Regional for the opportunity to advance to TBT’s Championship Week, where the winning team will receive a $2 million prize. 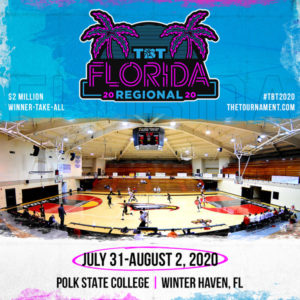 The winner of the Florida Regional will advance to Championship Week at the University of Dayton Arena in Dayton, Ohio from Aug. 6-11.

“As much as TBT is about putting deserving players and coaches on a worldwide stage, it’s about putting rabid fans on stage as well,” TBT founder and CEO Jon Mugar said. “It isn’t often that this level of talent comes together to play.”

The high stakes tournament consistently attracts the top basketball players in the world. More than 34 players have gone on from TBT to sign contracts with NBA teams. Last summer, 59 former NBA players took part in TBT, and 23 teams were composed of alumni from major Division I programs such as Kansas, West Virginia, Dayton and more. Carmen’s Crew, comprised of Ohio State alumni, dethroned four-time champion Overseas Elite and went on to beat Golden Eagles Alumni – a gathering of former Marquette players – in a thrilling championship game played in front of a record audience.

In addition to featuring the highest stakes format in the world, TBT has become known as a trendsetter in basketball circles. Its trademark, postgame bracket celebration has grown into a mainstay in the NCAA Tournament each year. In addition, the NBA has adopted an Elam Ending-inspired finish – where the first team to meet or exceed a set score wins – to their 2020 All-Star Game.

TBT’s registration period for teams interested in competing in any of their eight regional locations will run from March 15-June 15. The 64-team field and TBT bracket will be released on June 22.

To purchase tickets or for more information, visit thetournament.com