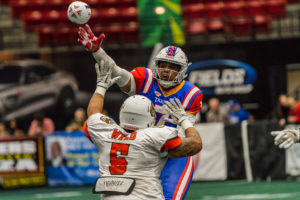 Arena Football will return to the RP Funding Center next spring, with the Lakeland Tarpons hosting the inaugural A-League game on May 11.

This will be the eighth straight season of arena football for the Tarpons, who will be joined by the Gulf Coast Fire of Fort Myers, the Sarasota BigCats and the Manatee Neptunes. The league is solely owned and operated by A-League Sports as a single entity operation.

The newly formed A-League will feature several unique innovations featuring new rules designed to speed up game play and enhance the fan experience. Teams will only carry 16-man rosters, which must include at least two players who play both offensive and defense.

One of the unique features of the league is its double header format in which each team market will host at least one double header game day.

“This is something that we have long wanted to do. It gives the fans added value for their ticket and allows them to see all four teams play in one evening for a single ticket price” said Commissioner Gary Tufford, whose pro sports resume includes the NFL, CFL and AFL.

The A-League season will run from May to the end of July 2019.