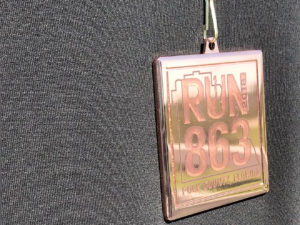 The first Run 863 race series is in the books.

PCTSM’s four race series, which mixed two existing events, the Carillon Classic 5K on March 10 and the Tiger Trot 5K on March 31, with one returning race, the Brick Dash 5K presented by Publix on April 14, and a new contest, the Safari Wilderness Run on Feb. 17.

Those that participated in three out of the four races earned a special PCTSM “863” medal.

The final race was perhaps the most popular. The Brick Dash presented by Publix returned to LEGOLAND Florida Resort after a year hiatus. With 1,400 runners registered, it was the best attended of the series.

The Brick Dash 5K presented by Publix benefited Merlin’s Magic Wand, a worldwide charity that helps ill, disabled and disadvantaged children and their families enjoy a day at one of the more than 120 Merlin Entertainment attractions around the world.

The Carillon Classic 5K, along with the Tiger Trot 5K, are both long standing annual events beloved by runners from Orlando to Tampa and beyond.

PCTSM is already planning for 2019.

“We plan on ramping thing up a bit now that the first series is under our belt,” said PCTSM Senior Sales and Events Manager Mark Zimmerman.