‘Road to the LPGA’ starts in Winter Haven

WINTER HAVEN, Fla. — Once again, the Country Club of Winter Haven serves as the starting point on the “Road to the LPGA” in 2018, hosting the 10th annual Florida’s Natural Charity Classic to open the Symetra Tour season.

A field of 132 players is set and they will compete for a purse size of $125,000 from Friday, March 16 to Sunday, March 18. Of the individuals comprising the field, a total of 27 countries will be represented. In addition, 20 total states boast at least one competitor.

First and second round action at the Florida’s Natural 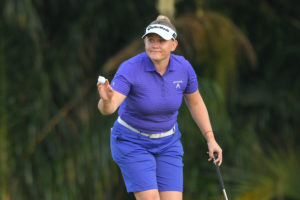 Olivia Jordan-Higgins during the final round of the Symetra Tour’s Florida’s Natural Charity Classic at the Country Club of Winter Haven on March 12, 2017 in Winter Haven, Florida. ©2017 Scott Miller

Charity Classic gets underway at 8:15 a.m. on Friday and Saturday, respectively. Following 36 holes of play, the field will be cut to the top 60 players and ties. Then on Sunday, the final round tees off at 8:30 a.m., with a trophy presentation to follow on No. 18 green.

The tournament also marks the first of 21 events in the season-long Race for the Card, where the top-10 players on the money list at the end of the year will earn a LPGA Tour card for 2019.

The Symetra Tour is the official qualifying tour of the LPGA Tour and enters its 38th competitive season in 2018. With the support of its umbrella partner Symetra, the Tour’s mission is to prepare the world’s best young women professional golfers for a successful career on the LPGA Tour. Since Symetra’s inaugural sponsorship year in 2012, the Symetra Tour has grown from 16 tournaments and $1.7M in prize money to $3M in prize money awarded over the course of 22 tournaments. With more than 600 alumnae moving on to the LPGA, former Symetra Tour players have won a total of 427 LPGA titles.