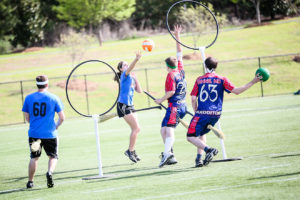 Quidditch players on the field

Quaffles, bludgers and a Golden Snitch or two were all on the field as muggles took part in the South Regional Championship for US Quidditch (USQ) at Lake Myrtle Park in Auburndale Feb. 16 and 17.

Teams from around the state of Florida as well as South Carolina took to the fields to play the sport featured in the popular Harry Potter novels by author J.K. Rowling and the subsequent movies. The fictional version of the sport utilizes flying broomsticks, various types of balls, and, of course, more than a little magic.

On the fields in Auburndale, play was adapted to our non-magical reality, as players astride broomsticks ran on the field while trying to score the most points by throwing balls through various hoops before the snitch – who is an impartial official with a tennis ball inside a sock hanging from their shorts – is caught.

Introduced as a sport in 2005, it has grown ever since, primarily on college campuses. However, quidditch is played in Canada, across Europe and Asia as well.

USQ hosts regional championships as part of the qualification process for teams attending the annual US Quidditch Cup. For teams from Alabama, Florida, Georgia, Mississippi, South Carolina, and Tennessee, this will was their opportunity to earn a shot at the national championship, the US Quidditch Cup, this year held April 13-14 in Round Rock, Texas.