On short notice, IRONMAN is a success 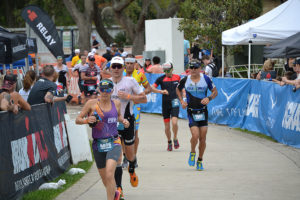 Runners during the Ironman Triathlon

Little did any of them know of the minor miracle that was required to have the event take place.

Just weeks earlier, it looked as if Panama City Beach would host the event. But the devastation wrought by Hurricane Michael left IRONMAN staff with a choice – either cancel the triathlon or find a solution.

As Hurricane Michael’s devastation became evident, IRONMAN staff, who were in Hawaii running their World Championships, discussed what to do. They had two choices – either cancel the event or find another location who had the experience and resources to host the massive event. Their only option soon became evident – to contact PCTSM.

The call to Marc Zimmerman – who quickly conferred with Mark Jackson – came in the middle of the night. As soon as morning came, PCTSM staff reached out to representatives from the Polk County Sheriff’s Office and the City of Haines City to work out the particulars. Representatives from IRONMAN, PCTSM and Haines City hit the ground running, modifying the path normally taken for the IRONMAN 70.3 – also known as a Half IRONMAN – to make up for the logistical differences a full triathlon requires.

The largest logistical problem the event had was trying to find more than 2,000 volunteers in less than three weeks.

In all, the projected economic impact of IRONMAN is $5 to $10 million.