Not forgotten, Banana George lives on this weekend

WINTER HAVEN – Gone – but surely not forgotten – the spirit of longtime Polk County fixture Banana George will be on display as the 2022 Banana George Blairfoot Bananza will hit the waters of Winter Haven’s Lake Silver this weekend.

Funds raised from the weekend go to one of Banana George’s beloved causes, the USA Water Ski and Wake Sports Hall of Fame Scholarship Fund. 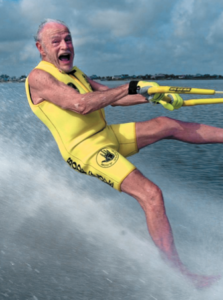 George Blair – known as Banana George due to his bright yellow wetsuit – passed away in 2013 at the age of 98. A popular Cypress Gardens water skier and endless self-promoter, he’d skied exhibitions in 45 countries, an even more impressive feat since he only took up water skiing at 40 as a form of rehabilitation after spinal fusion surgery. A successful businessman, legend has it that he never took a paycheck while performing up to five shows a day at Cypress Gardens.

Organizing the event is Betsy Anderson Gilman, a former CNN executive producer who quit her day job to chase a dream of becoming a barefoot waterski champion in 2016. That year she earned medals at the national level and ended up in fourth place overall in her division. While continuing to freelance in media and production, she also conducts water ski clinics around the country.