These aren’t your kids radio controlled models. Some cost as much as $30,000

LAKELAND – Just as they did during World War II, the military aircraft of yesterday will return to the skies over Lakeland once again… 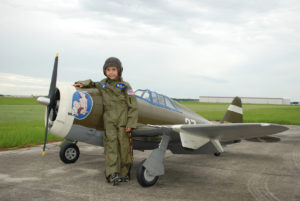 For years now, Frank Tiano Enterprises has brought the radio-controlled aircraft spectacular of 12 O’Clock High to Paradise Field in Lakeland. This year, from Oct. 25-27, the skies will buzz with replica warplanes, biplanes and planes of yesteryear embracing more than six decades of aviation history. With some wingspans exceeding six feet, these aren’t department store models. Welcome to the world of large-scale radio controlled airplanes, on average weighing 50 pounds and having as much as 20 or more horsepower – and costing up to $30,000.

And Tiano should know – he has been interested in the hobby since 1951.

He found his way back to the hobby in 1972, even joining with two other enthusiasts to form an adhesive company in 1979, a company that today continues to make various types of model glues. Ten years later, in 1989, Tiano felt his hobby should be brought to the attention of the world.

“And that was Top Gun,” he said. “Today it is an international event with industry support. It remains the only scale aero modeling event in the world with cash prizes.”

However, Tiano stresses, 12 O’Clock High is not a competition.

“It’s a fly-in,” he said. “They come out for the camaraderie, to come out and fly together.”

Tiano said 12 O’Clock High draws about 100 pilots with 220 airplanes and as many as 4,000 spectators. And while he enjoys providing family-friendly entertainment, Tiano said he also likes the potential of boosting local businesses.

“I came to realize it’s also good for the community,” he said. “I enjoy making things work and people making money, people having a good time. So I’m providing a service and fun at the same time.”

Paradise Field is located on a portion of Lakeland Airport property at 4999 Air Show Road, just off of Pipkin Road. The event is from 9 a.m. to 5 p.m. from Thursday through Saturday. Besides the airplanes, there will be a food court as well as numerous hobby vendors. Admission is $10 at the gate, which includes parking and a pit pass. Children under 12 enter for free.