Marketing Polk as the Water Ski Capital of the World 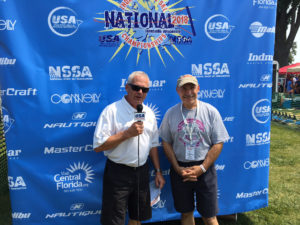 When the Rock Aqua Jays of Janesville, Wisconsin, won the national team title at the 44th Indmar Marine Engines Division I Show Ski National Championship, they did so under the auspices of Polk County Tourism and Sports Marketing, the presenting sponsor of the largest national water ski championship in the country.

For PCTSM’s director, Mark Jackson, being there and serving as the broadcast announcer means business for Polk County.

“There were more than 300,000 video views of the D-I Nationals,” said Jackson. “The industry standard is that each view is worth at least 25 cents – or that the sponsorship of that event alone returned at least $75,000 worth of views. That’s a pretty good return on investment.”

The home town Rock Aqua Jays were only one of 14 teams that qualified for the event held at Traxler Park in Janesville. Other teams hailed from Madison, Wisconsin; Wonder Lake, Illinois; and Minneapolis, Minnesota; and Warsaw, Indiana, just to name a few.

“Around the Great Lakes, just like here in Polk County, water skiing a part of everyday life,” said Jackson, a former professional water skier himself. “But here, we can do it year round. And the nights around the lakes are already dipping into the lower 50s. Part of our strategy there is to remind them, during this time of year, that our eternal summer weather is just a short plane flight away.”

The sponsorship of the national championship was just one part of a year round comprehensive partnership between USA Water Ski & Wake Sports and PCTSM. Most of the teams – some with more than 200 members – have and continue to be recruited to train in Polk County during the colder months.

“When it comes to participatory sports, we are known nationwide as the Water Ski Capital of the World,” said Jackson. “Additionally, our research shows that the geographic location of water skiing in the Upper Midwest fits in perfectly with our overall marketing goals. Let me put it this way – we’d be remiss if we weren’t there.

“With the imminent opening of the Lake Myrtle Water Sports Complex, the new home of USA Water Ski and Wake Sports, the United States Olympic Committee’s governing body for the sport, PCTSM has been aggressively marketing the area as the world’s foremost water sports destination.”