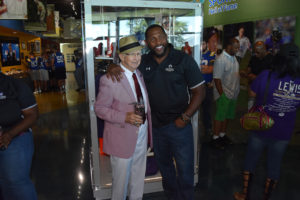 Ray Lewis poses for a photograph during the unveiling of his collection at the Polk County Sports Hall of Fame Museum.

Ray Lewis, fresh off his induction to the Pro Football Hall of Fame, stopped by the Polk County Hall of Fame as part of his weekend full of induction ceremonies.

Born in Bartow, Lewis played football at Kathleen High School in Lakeland before attending the University of Miami. He was selected 26th overall in the first round of the 1996 NFL Draft.

The Polk County Sports Hall of Fame is located at the Lake Myrtle Sports Park, 2701 Lake Myrtle Park Road in Auburndale and is open to the public Tuesdays-Fridays from 9 a.m. to 4 p.m.