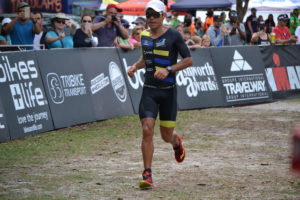 The rain clouds cleared away from Haines City just in time for the 2018 IRONMAN 70.3 Florida to go off without a hitch for the more than 2,100 athletes from around the world, including the more than 80 Brazilian athletes who participated.

A part-time firefighter and paramedic outside of Cleveland, Ohio, Woolf walked the last part of the race in full firefighters gear to help raise money and awareness for the National Fallen Firefighters Foundation as well as Rescue 4 PTSD.

PCTSM and the IRONMAN crew worked tirelessly for the week before the three day event. Participants often practice parts of the course on the Friday and Saturday before the event, and some even weeks before the event.

“This is a home game for the IRONMAN crew,” said Josh Hicks, the PCTSM sales and event representative coordinator with the IRONMAN event. “Since their offices are in Tampa, many of them participate in this race. So everyone works extra hard to make it perfect.”

Held at Lake Eva for the past seven years, IRONMAN has a $2.5 million impact on the Haines City economy.