Holloway Park event largest of its kind in the state 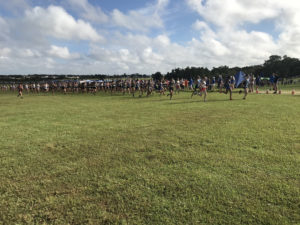 Nearly 5,000 runners – from elementary school aged through college – took to the rough and ready terrain of Holloway Park to test their mettle against the best the state could muster.

This is the second year the flrunners.com Invitational was held at Holloway Park, and the first year the event ascended into becoming the largest cross-country meet in the state.

Teams throughout Florida, as well as Georgia and beyond, participated in the two-day event. PCTSM staff provided everything from hands-on support to registration assistance and even made sure there was enough ice on hand to keep the runners cool. Temperatures on the field Friday soared to 105 degrees before the first race.

The flrunners.com Invitational has been a staple on the Florida cross-country calendar since it started in 2000. Jason Byrne, who founded the meet while a sophomore at Florida Southern College, held the first annual race at Polk Community College in Winter Haven. The event flourished there for three years, doubling each year during that time span from 450 to 900 to 1,800 athletes. Last year, Holloway Park hosted 191 schools, from which there were 376 teams and more than 3,000 athletes who finished the 20 different races, making it one of the largest annual cross-country events in the nation.

Up until last year, the flrunners.com Invitational had called Titusville home for the previous decade. But the combination of the larger facility in Holloway Park – especially its vast number of spectator viewing spots – as well as the accommodations available in the area, helped the staff at PCTSM woe the event back to Polk County. It didn’t hurt that Byrne’s once worked as an intern at PCTSM while attending Florida Southern.

PCTSM forecasts that the meet will bring in more than $1 million of direct economic impact.