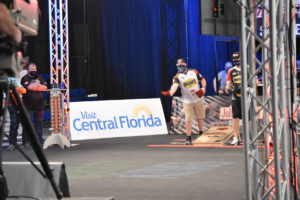 he 2021 ACL Kickoff Battle from Feb. 5-7. The tournament was broadcast both live and by tape delay around the world on various ESPN channels. It was the highest rated sports broadcast on Sunday, Feb. 7…besides that day’s Super Bowl.

Featuring both men and women competing both as individuals and doubles, the event highlight may be been the return of “SuperHole,” held in the proximity of the Super Bowl every year. SuperHole pairs four top ACL pros alongside four top football personalities. This year, former Alabama teammates DeVonta Smith, paired with ACL Pro Matt Sorrells, and Mac Jones, who competed with ACL Pro Devon Harbaugh, faced pro football legends Doug Flutie and Rashad Jennings, who were partnered with ACL Pros Matt Guy and Cody Henderson, respectively.

The ACL Kickoff Battle was one of a string of events keeping the staff at the AdventHealth Fieldhouse and Conference Center busy. PCTSM has recruited basketball, volleyball, gymnastics and martial arts to the facility that was opened just weeks before the dawning of the Coronavirus pandemic.