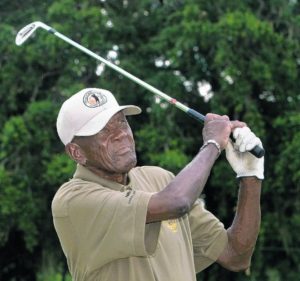 BARTOW – Once again, some of the greatest golfers in the history of Polk County will gather as part of a community fundraiser in honor of the area’s black golf pioneer, Herbert Dixon, as he nears his 100th birthday.

The annual Herbert Dixon Charity Golf Tournament, to be held at the Bartow Golf Course on Jan. 5, helps raise funds towards various scholarship programs for deserving and under financed students. More than $45,000 in college scholarships have been given away due to the tournament through its sponsor, the Bartow Deacons and Stewards Alliance, Inc.

Golfing will be Andy Bean, who won 11 PGA Tour victories, and Jim Dent, who won 12 tournaments on the Senior PGA Tour between 1989 and 1998.

Also playing will be Dixon himself. Still on the course daily at 99 and a member of two different golf halls of fame, the highlight of his golf career was winning the 1951 National Negro Open.

“He’s an inspiration to all of us,” said Chris Banks, golf pro of the Bartow Golf Course. Dixon learned the game as a caddy on the same course where the tournament will be held. At the time, he wasn’t allowed to play on the course due to his color. Today, he plays daily, often shooting in the low 70s.

Golf legend Andy Bean will also take to the course that Saturday. Bean, a graduate of Lakeland High School, has 18 professional wins, 11 on the PGA Tour. A University of Florida graduate, he currently plays on the Champions Tour. Bean was inducted into the Polk County Sports Hall of Fame in 2001.

To enter the tournament or for sponsorship information, contact Carver Young at (863) 533-1207 or via email at carver.young863@gmail.com.