FROSTPROOF – The fastest growing segment of shooting sports will have their first world championships in Polk County.

“This is special to me,” said Mike Foley, the president and CEO of the United States Practical Shooting Association (USPSA). “Getting PCC into practical shooting was sort of my pet project. Now, it has become a cottage industry by itself. Getting the first World Shoot for this category here is the legacy of something we started three years ago.” 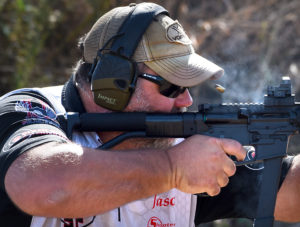 USPSA was the first national shooting sports organization to adopt PCC as a discipline. The largest practical shooting organization in the United States with 30,000 members and nearly 50 clubs, the USPSA has the largest active membership in the International Practical Shooting Confederation (IPSC).

To land the first World Shoot for the PCC classification, Foley and Frank Garcia, the owner and founder of Universal Shooting Academy, traveled to Belgrade, Serbia to give their presentation in front of the more than 100 nation governing body. They won the bid over competitors from the Czech Republic, Russia, Norway and Brazil. To Foley, the sudden explosion of interest in the sport is no surprise.

“Really, it is just fun. Practical shooting is fun by itself, and the PCC is a fun weapon,” said Foley. “When you combine the two it is a good time. A PCC is easier to manipulate than a handgun and less intimidating to shoot.”

Nor is the uniqueness lost on Garcia.

“Basically, you have a rifle-type sporting firearm you can shoot at any firing range,” said Frank Garcia, the owner and founder of Universal Shooting Academy. “When this segment was first announced, we thought it would be a bunch of handgun guys going over. Instead, it has been rifle enthusiasts coming in, which has quickly broadened the appeal of the sport.”

An exact date for the event has not been determined.

“We’re only as strong as the rest of the links in the chain,” said Garcia. “Polk County in general and the folks at Polk County Tourism and Sports Marketing in particular have been instrumental in the recruitment process.”

World Shoot XVII was held in Frostproof and Lakeland in 2014. The economic impact of the event was more than $7 million.

“We showed the world that we could host an international level event in 2014,” said Mark Jackson, the director of Polk County Tourism and Sports Marketing. “Frank and his folks have held plenty of national events since then. When you say Universal Shooting Academy, people around the world know it is a premier practical shooting venue. And Frank’s facility, by hosting numerous national events, has not only had an impressive economic impact on the area, but brings nontraditional visitors to Polk County.”

Practical shooting, unlike traditional target practice, involves competitors combining both precision and speed to score as many points as possible in the shortest amount of time. It is also the fastest growing firearm sport segment.

“It is something the whole family can do together,” said Garcia. “In fact, the most growth in the sport is among women.”