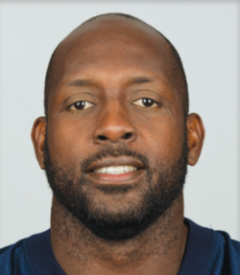 Perseverance, flexibility, individuality – it would be easy to sum up former NFL tight end Dez Clark with those words.

But it wouldn’t be enough.

Brought up in Lakeland, his father’s battles with addiction derailed Clark’s family. Soon, Clark’s mother struggled to provide for her children.

Dez escaped to the sports field. Excelling in basketball, baseball and football at Kathleen High, the high school quarterback found himself at Wake Forest University in North Carolina. Converted into a wide receiver, he finished his college career as the Atlantic Coast Conference all-time leader in receptions with 216 receptions for 2,834 yards and 20 touchdowns – numbers that caught the eye of the Denver Broncos. Clark was drafted in the sixth round of the 1999 draft.

Clark was converted to tight end and initially struggled to learn the role. Seeing him struggle, the man who scouted Clark pulled him aside and told him to start competing with himself – a phrase that would become Clark’s mantra for his career.

After three years with the Broncos and a year with the Miami Dolphins, Clark found a home with the Chicago Bears in 2003. Three years later, Clark helped the Bears win the NFC Championship and a trip to Super Bowl XLI with regular season statistics of 626 receiving yards on 45 catches and six touchdowns.

In 2008, while with the Bears, Clark started his “88 Wayz Foundation,” which aims to send mentors into schools in both the Polk County and Chicago areas. Clark said the help he received from others inspired him to start the organization.